Adding to the topic, I recently acquired another Chinese Type-56 Carbine with some interesting features.  The Jianshe Arsenal /26\ SKS, with original matching serial number 9048960, fits nicely within the general serial number range of the 1965 production guns.  Yet, it does not exhibit the features of the Russian laminated stock, nor the typical blued bolt carrier.  However, this example bears the painted Arabic numeral rack numbers that are sometimes found on the Egyptian Contract specimens.  A yellow painted number "1" appears on the left buttstock, and white painted "1 | 2" marks appear on the right buttstock.

The gun, itself, is in non-refurbished condition, and exhibits much field wear and appropriate patina.  It has the Chinese chu wood stock that is inletted only for the blade bayonet.  As a big bonus, it also came with a well worn, soiled and sweat stained Romanian leather sling.  It is CAI marked on the barrel, and was likely imported in roughly the same time frame (mid to late 1980's) as my Soviet-made example.

Another peculiar feature is found in the buttstock trap, which has a decayed and broken return spring for the cleaning kit door.  A small piece of blue colored wax-type paper or tape is caught under the buttplate itself.  I will likely not remove the buttplate to investigate, as it is quite deteriorated across the top, and I don't want to damage it any further.  This is an example of a gun that should be kept in the same condition as it is found.  Not many of these former Egyptian-owned SKS's show up on the market. I feel very privileged to place this very uncommon specimen with all my other SKS's that were issued and carried in conflict regions.


Contributed by Martin (martin08)
Standard 9 million series rifle. Contributed by Mitch Speth
This /26\ 9 mill is right in the middle of the Sino/Syrian SKS serial range. It also has the correct import stamp on the barrel. It has seen its fair share of abuse.. As you will see in the pictures. It was full of rust when I got it, and has quite a bit of pitting throughout.

But, to add.. there are a few odd things about this rifle that are not seen every day.. Enjoy!

9 mill Chinese rifle, in a Russian hardwood stock, a quite uncommon Sino/Syrian feature. 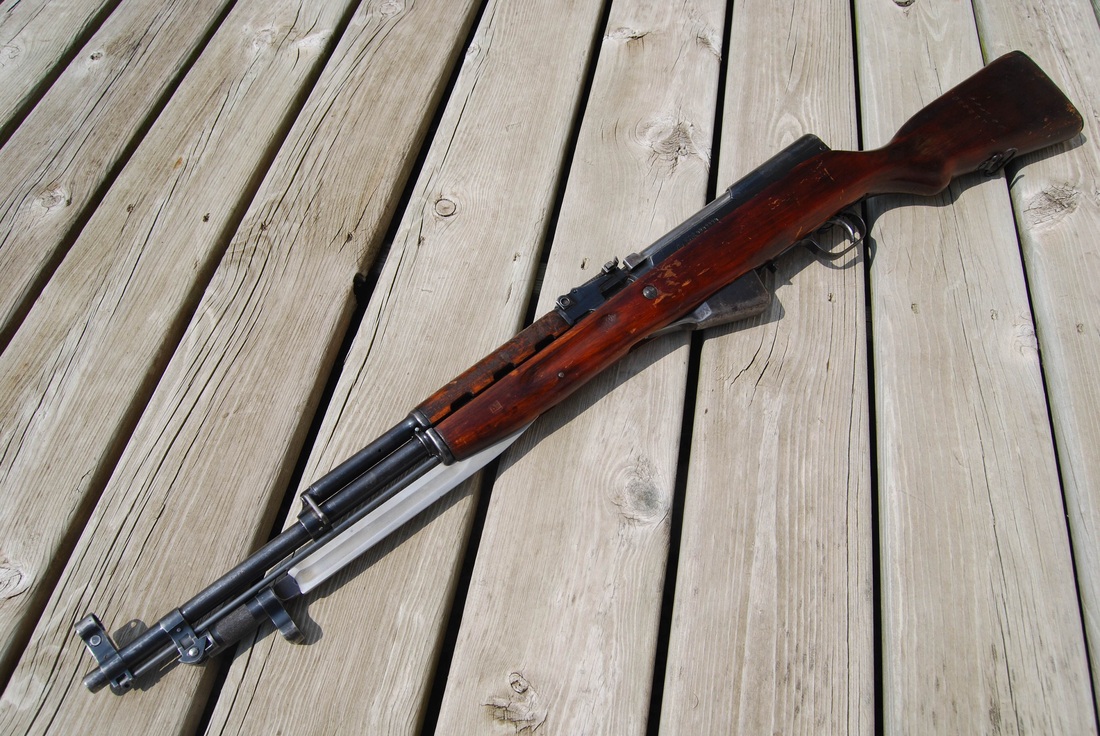 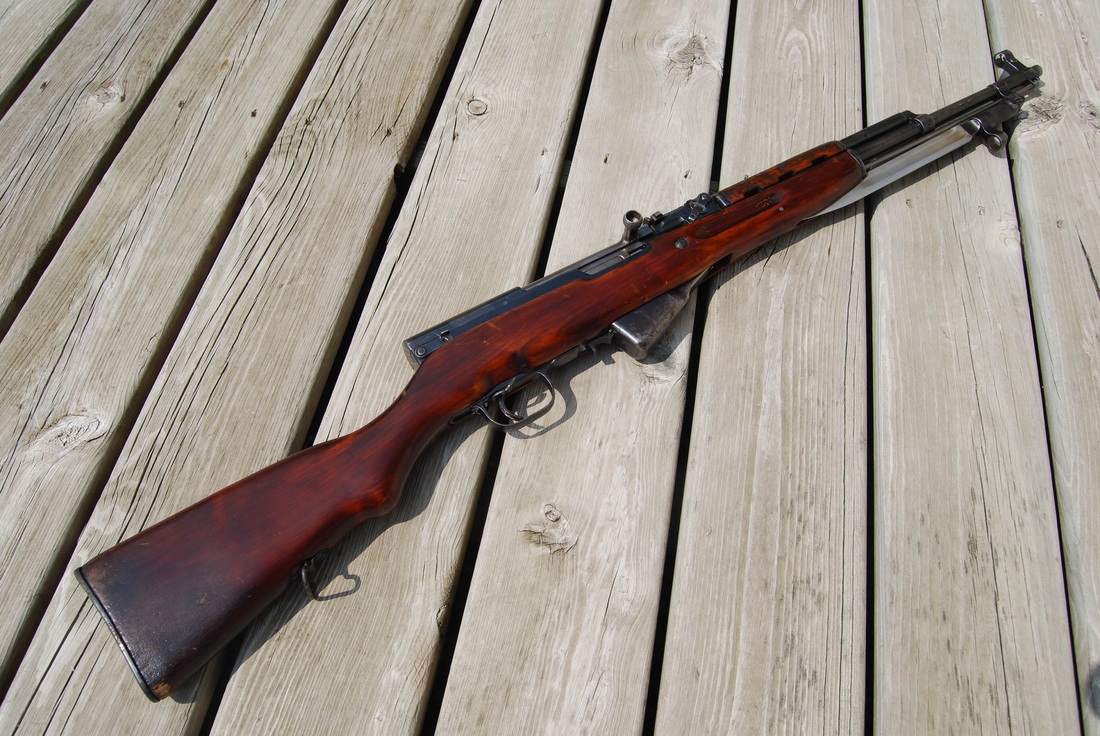 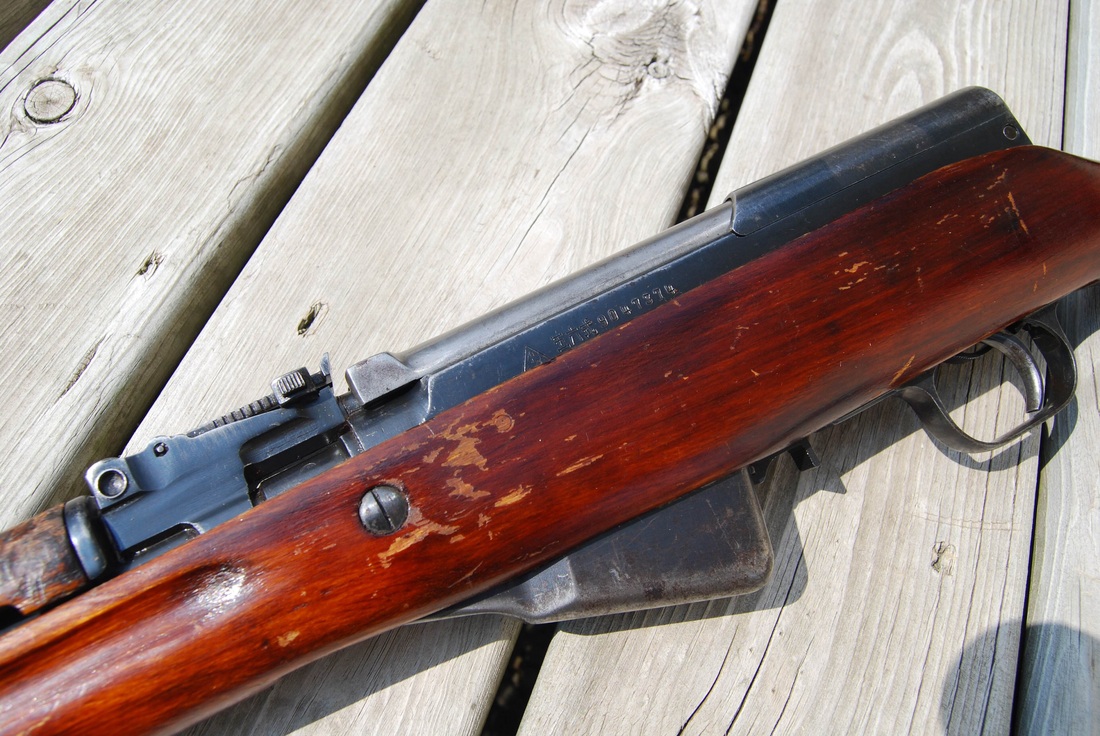 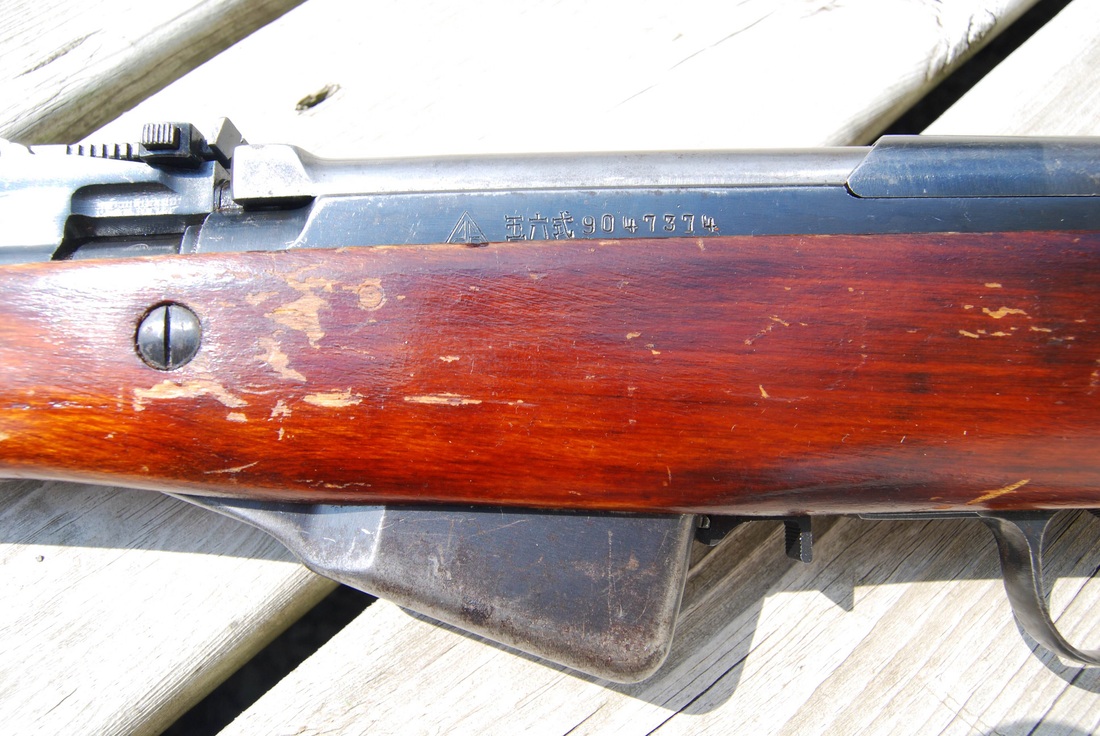 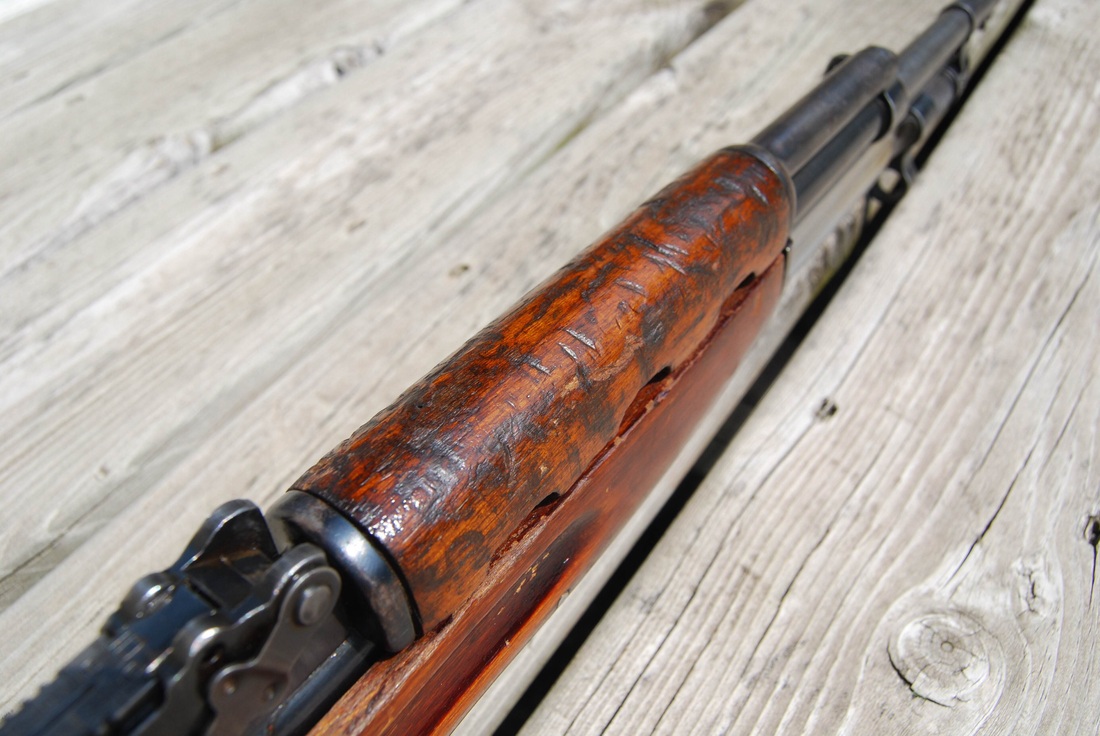 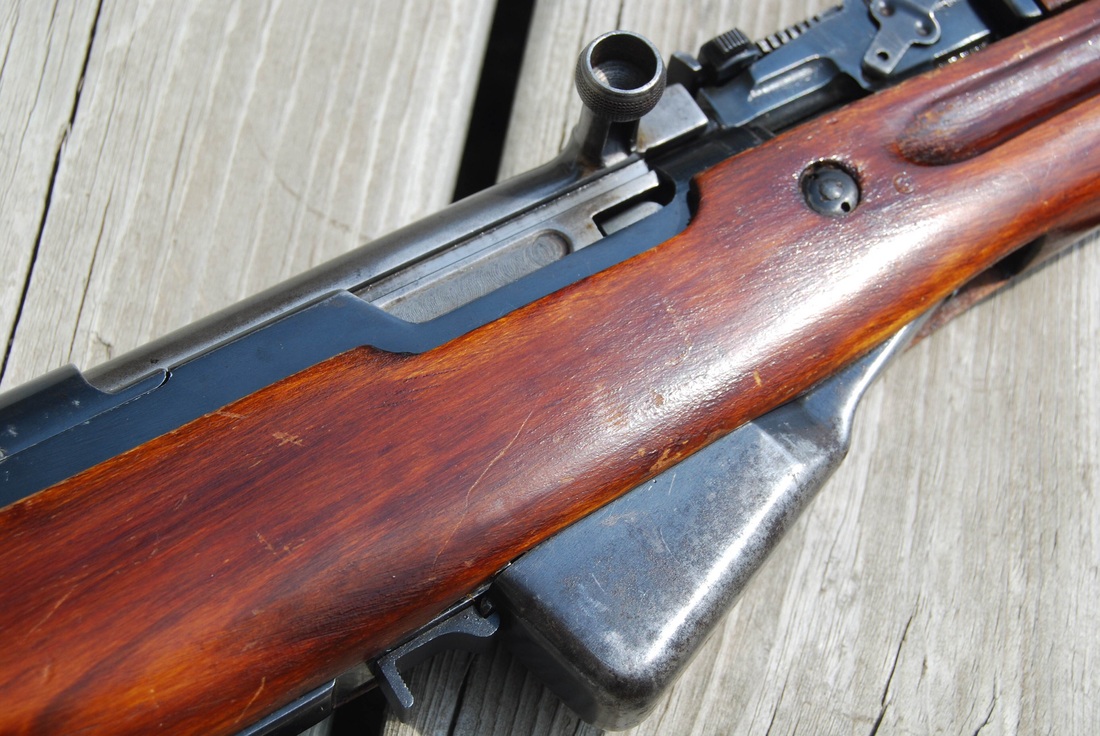 The original Serial on this Russian stock has been slashed out, instead of the common X. Could just be a different Russia refurb method, but it is not seen often. 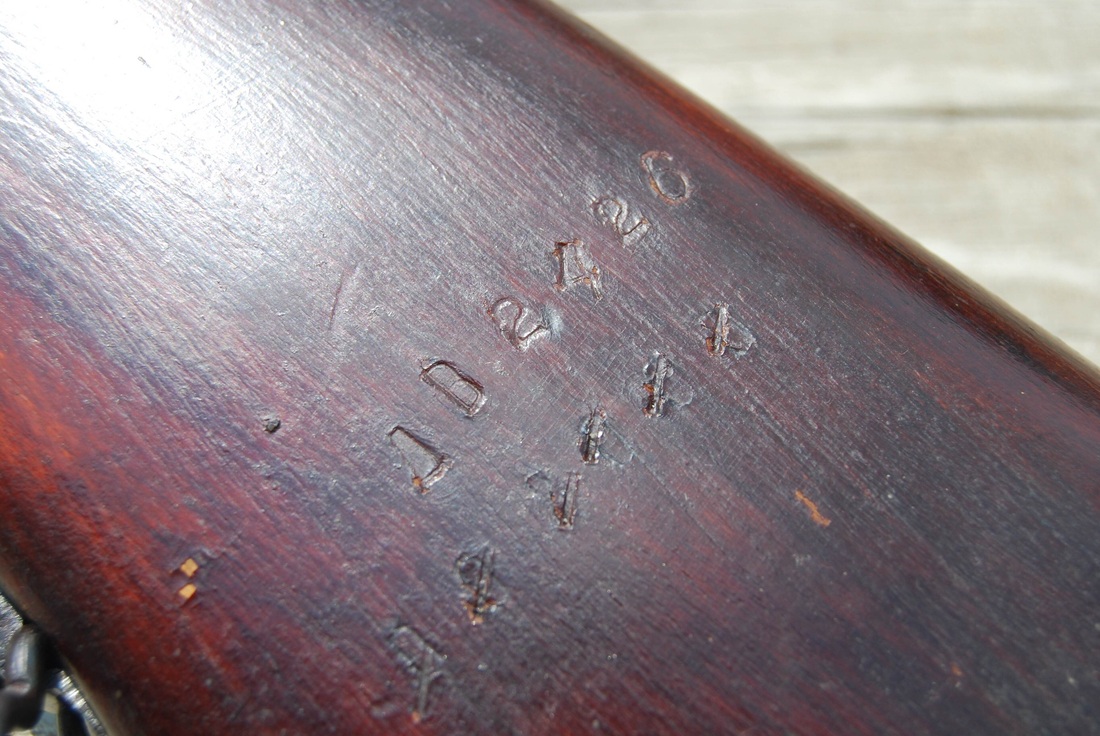 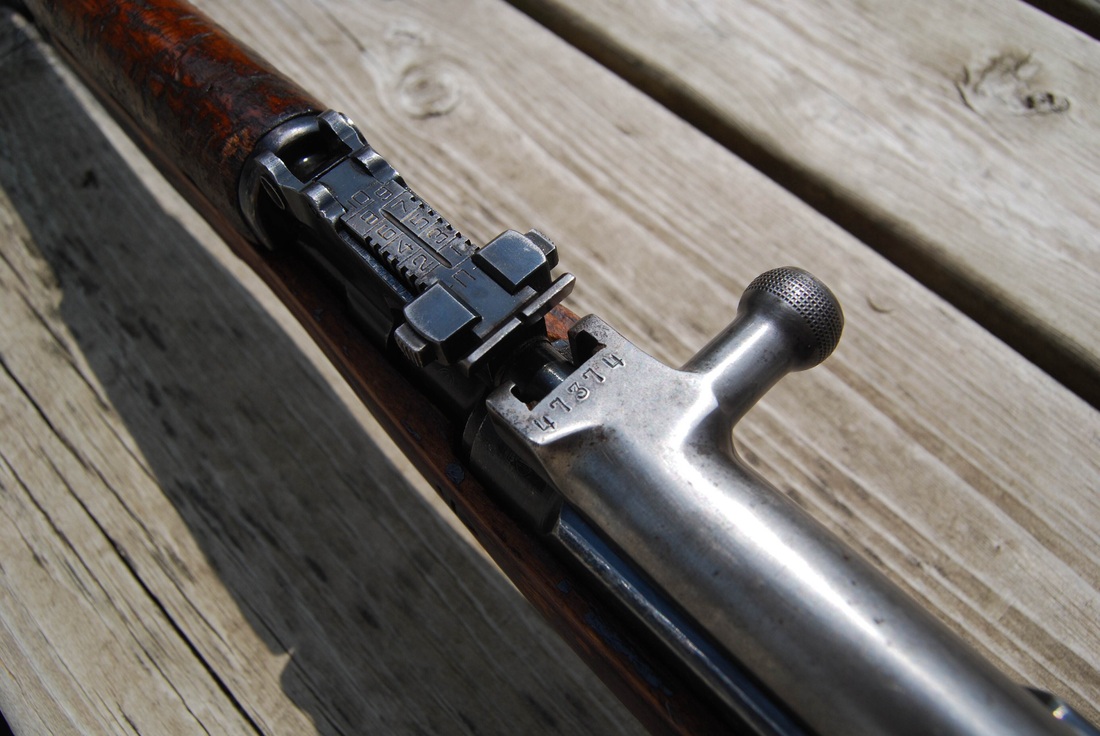 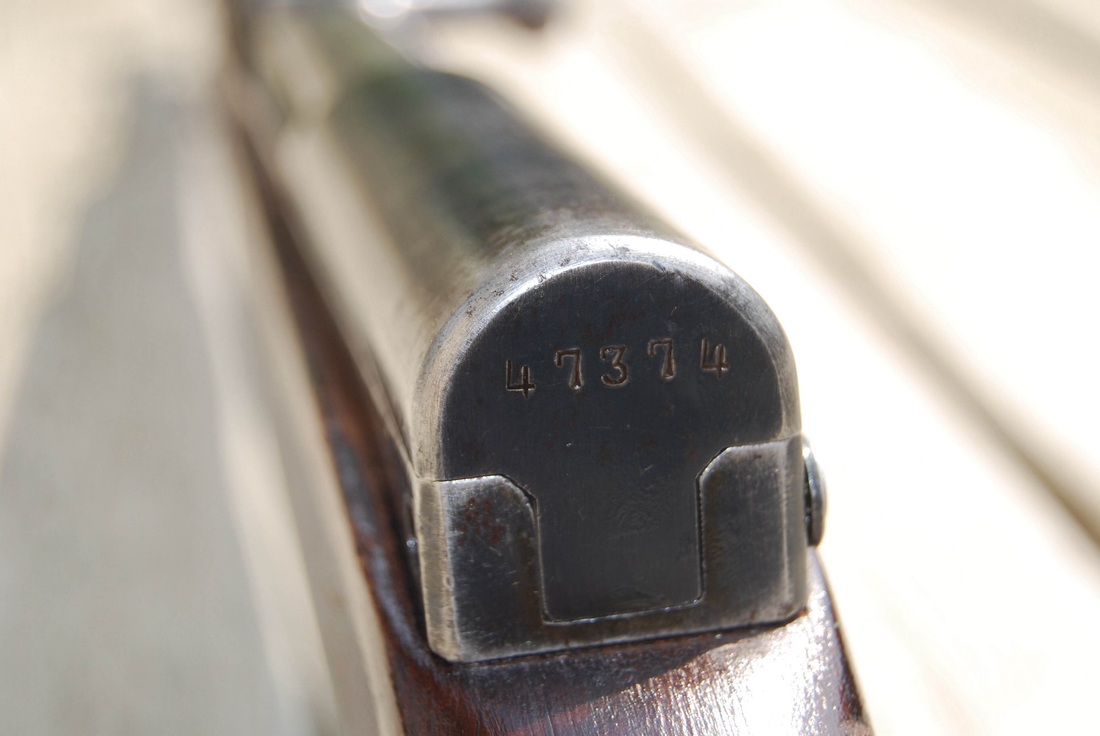 Another strange thing about this rifle is this small stamp, located on the front left side of the stock. It is not a very deep stamp, and the missing shellac kind of messes it up a bit. It is a square, with almost what looks as if there is a 1-2, a line beneath it, and then a couple more strange characters. Again, not something you see every day: 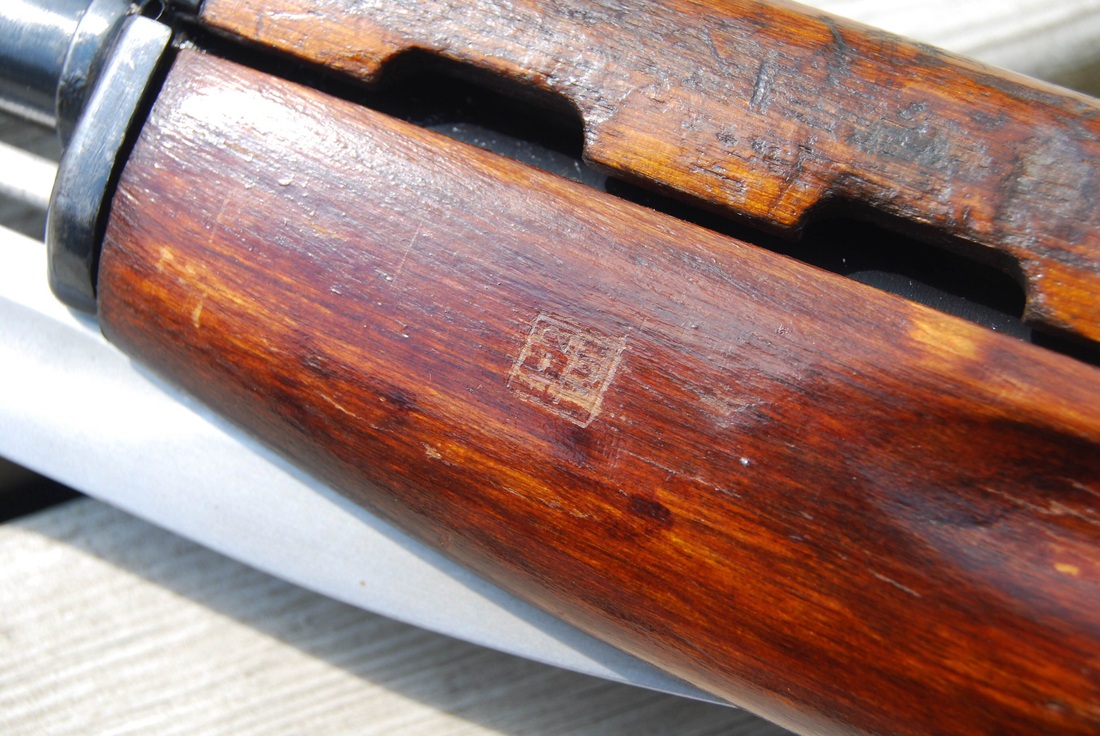 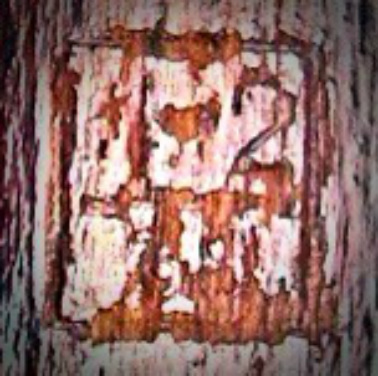 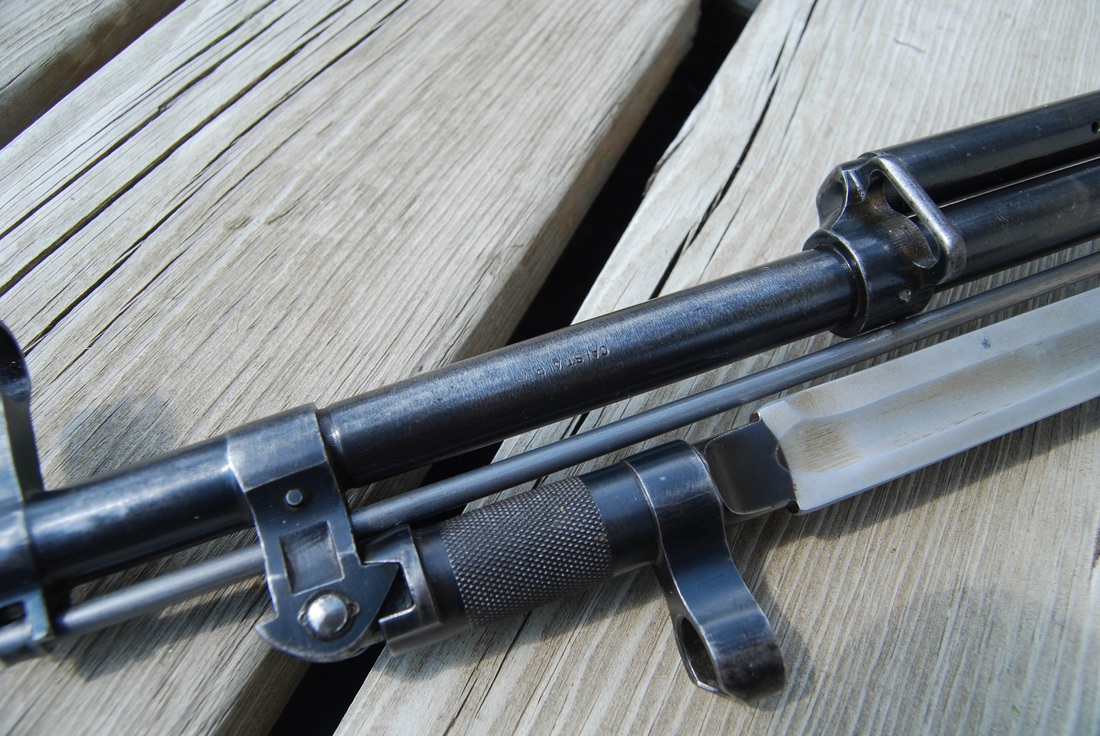 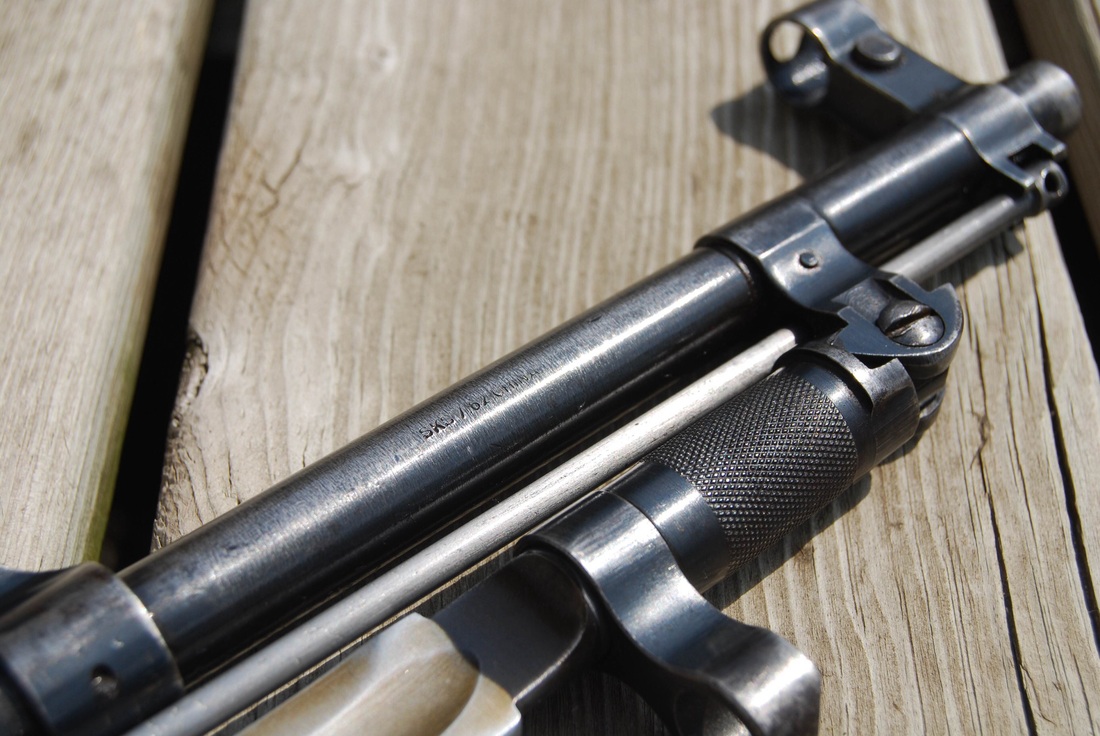 Last but not least.. the symbol, which I believe to be a Jiim, (Which is an Arabic Letter) and what has been found on Iraqi property marked rifles. However, I do not believe this rifle was marked by iraq, but rather by one of the other Arab nations of the time, such as Syria. Iraq usually (but not always) included a triangle around their Jiim's, and Iraq never received Chinese aid until the 80's during the Iran/Iraq war, and 23/24 mills are usually found there. Syria did receive arms from China in the late 60's, however. (Note, this is a 1965 rifle) 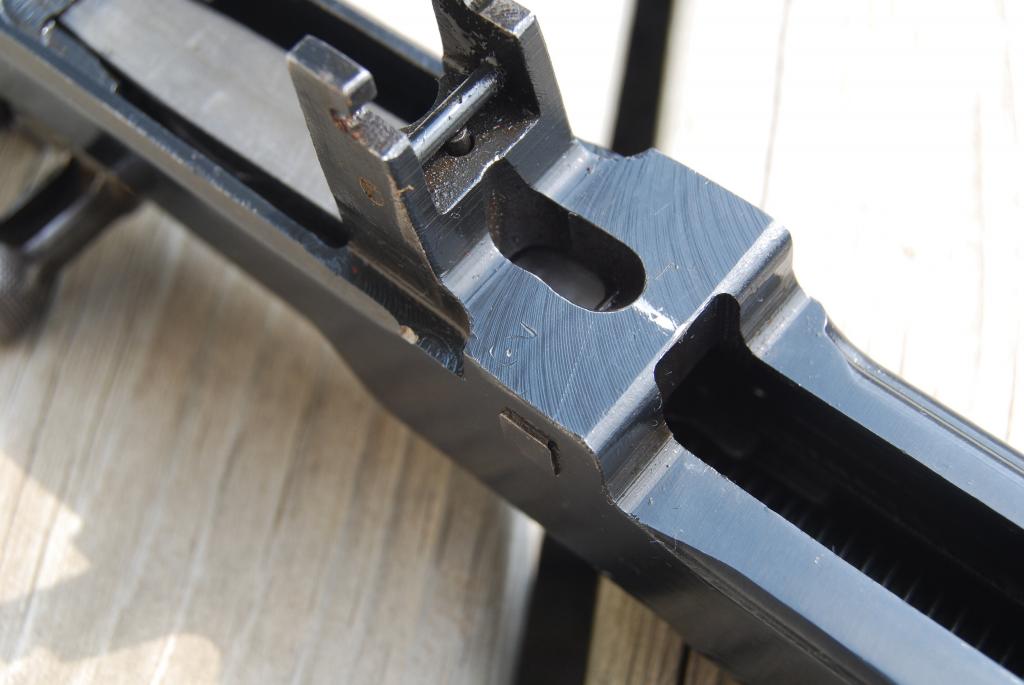 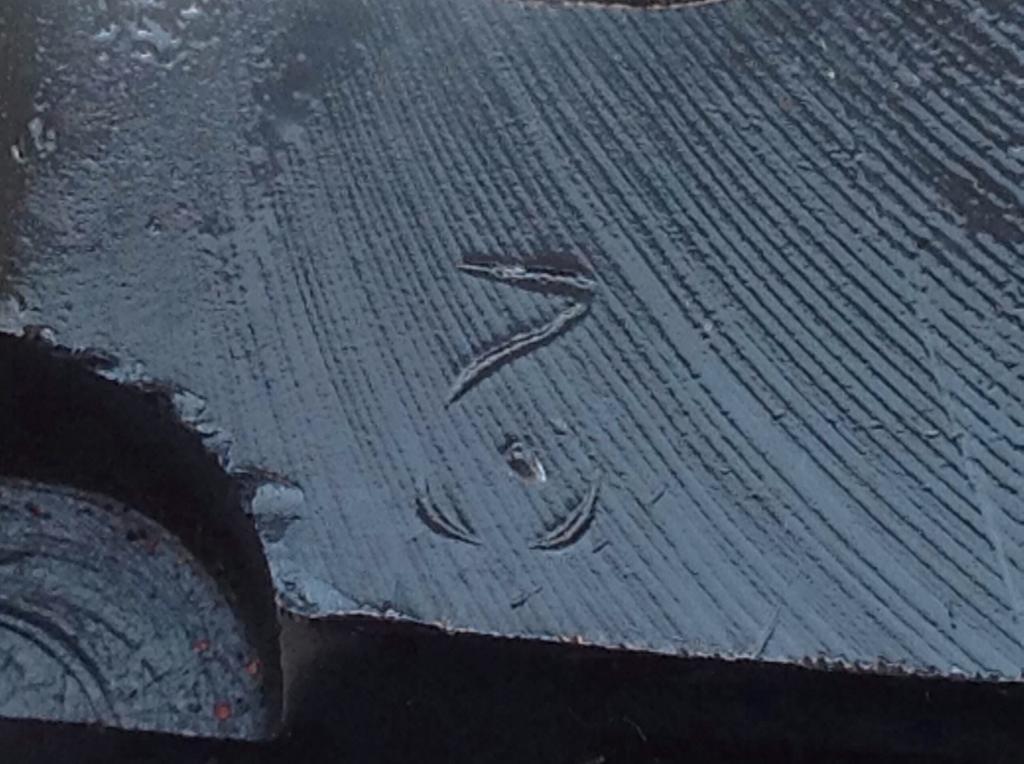 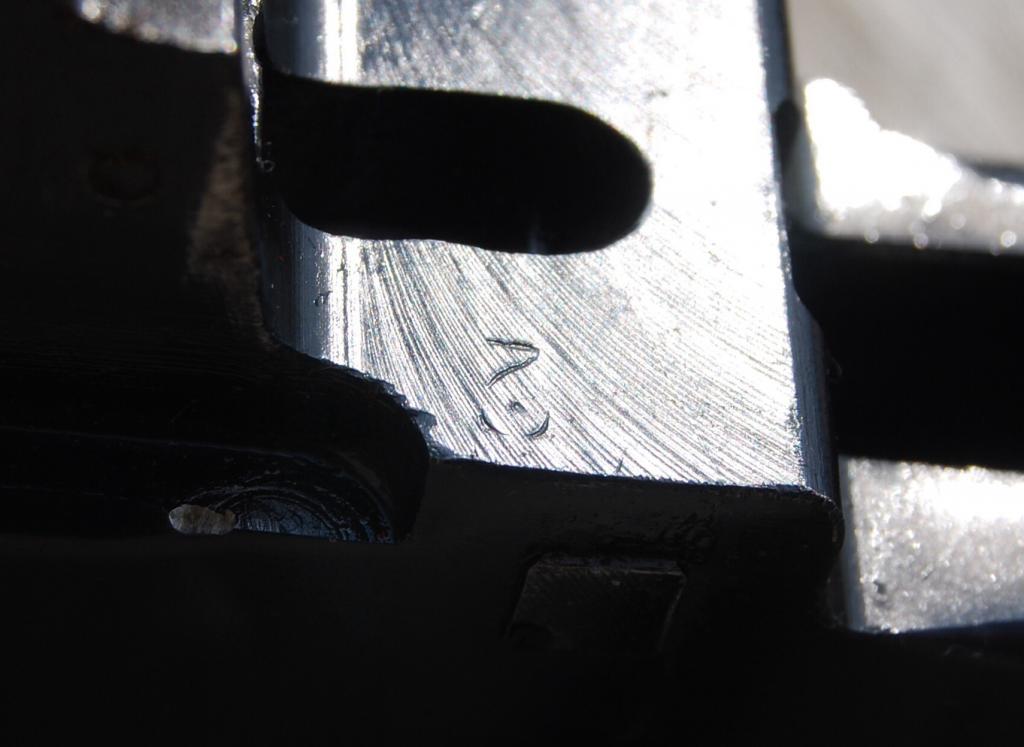 What leads me to believe this isn't just a 2, is the overall shape, and the (sloppy) dot in the middle. Seeing it in person is much different, but this is the best I can do. The flat part of the symbol (which would be the bottom of a 2 if it were) comes to sort of a point.. And is shorter than the upper rounded part, which actually isn't fully rounded, but ever so slightly squared off at the edges. The rest of the bottom of the receiver, is completely sterile, as are most other 9 mill rifles. The overall shape of the Jiim shares a very close resemblance to MRC's Iraqi marked bag: 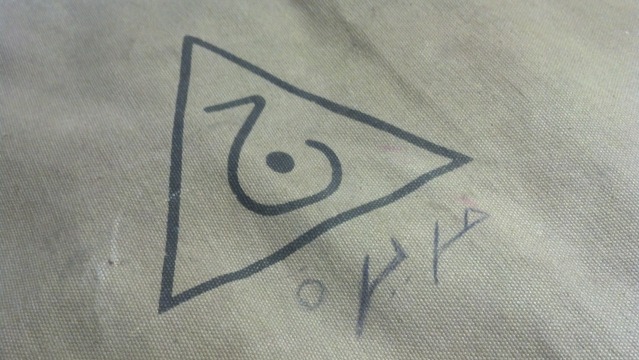 Why marked on such an odd spot? Not sure, but after seeing MRC's Iraqi marked Chicom, which is also marked on the bottom of the receiver with a jiim, it leads me to believe it may not be such an odd spot after all.


A small collection of property Jiim's on items. 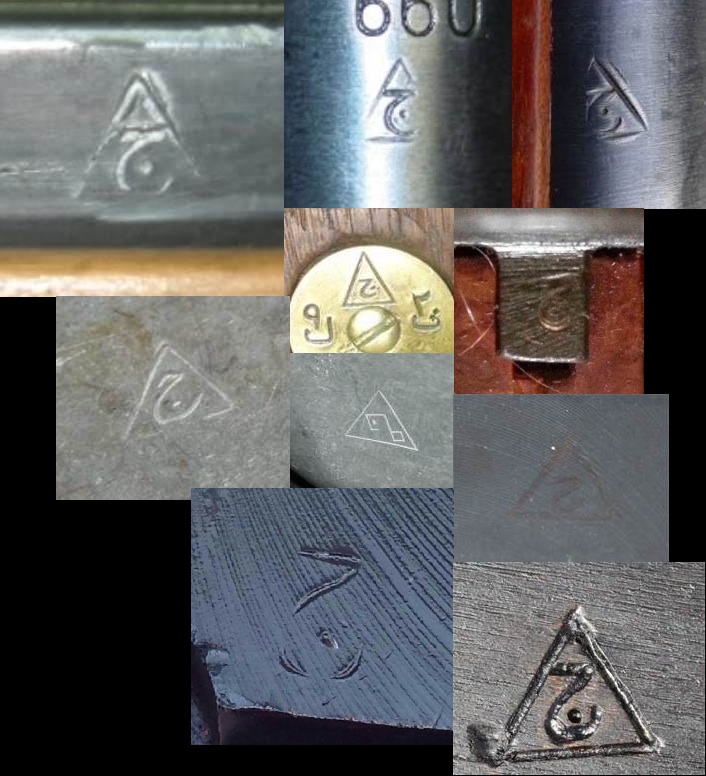