For those that don't know it Navy Arms made there fortune by reissuing rifles and pistols made famous in the 1800's. They made Colt style revolvers, flintlock pistols, Hawken rifles, muskets and Henry lever actions the list goes on and on. Still in business today  NA didn't date there catalogs but they did date the price sheet. Price sheet also shows location the the catalog. The Navy Arms SKS  story started in 1988.  Val Forgett (owner) wanted to tease the masses. So he put the SKS on the cover in 1988. There is no mention of the rifle in the catalog or in the price sheet. The rear cover has the RPKS-74 in .223. I do believe this is first for the company also. 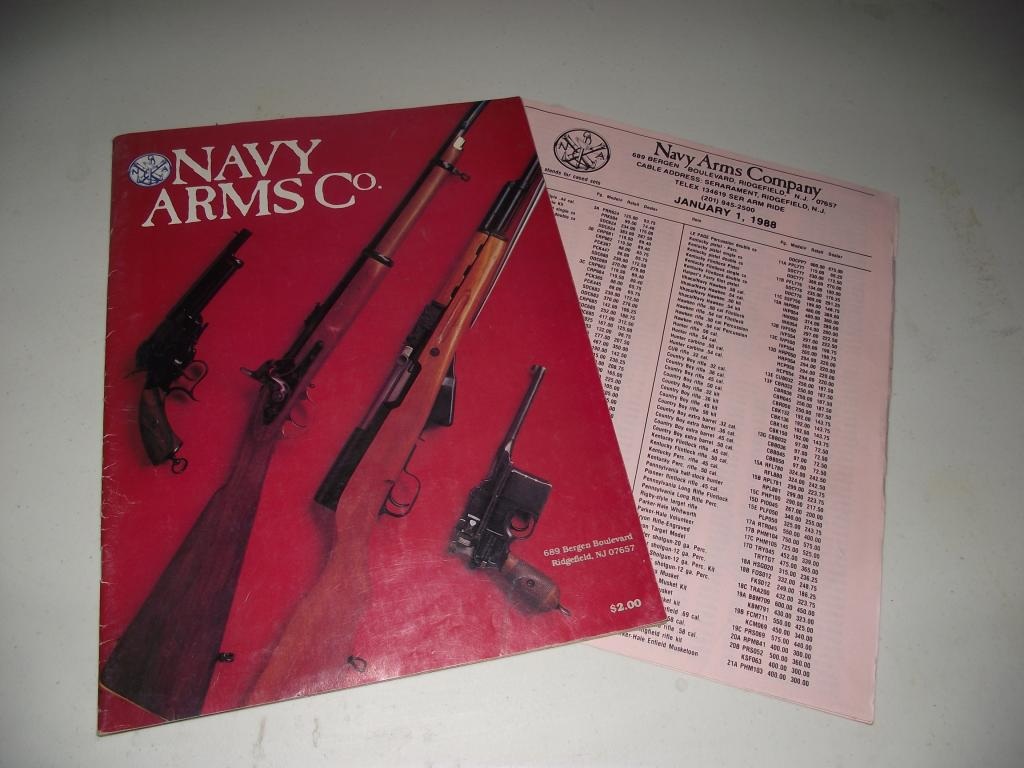 The ball got rolling in 1989. The first issue with the SKS. They jumped into military surplus head first. Garands, M1's, MAS 36's and every Mauser you can think of. 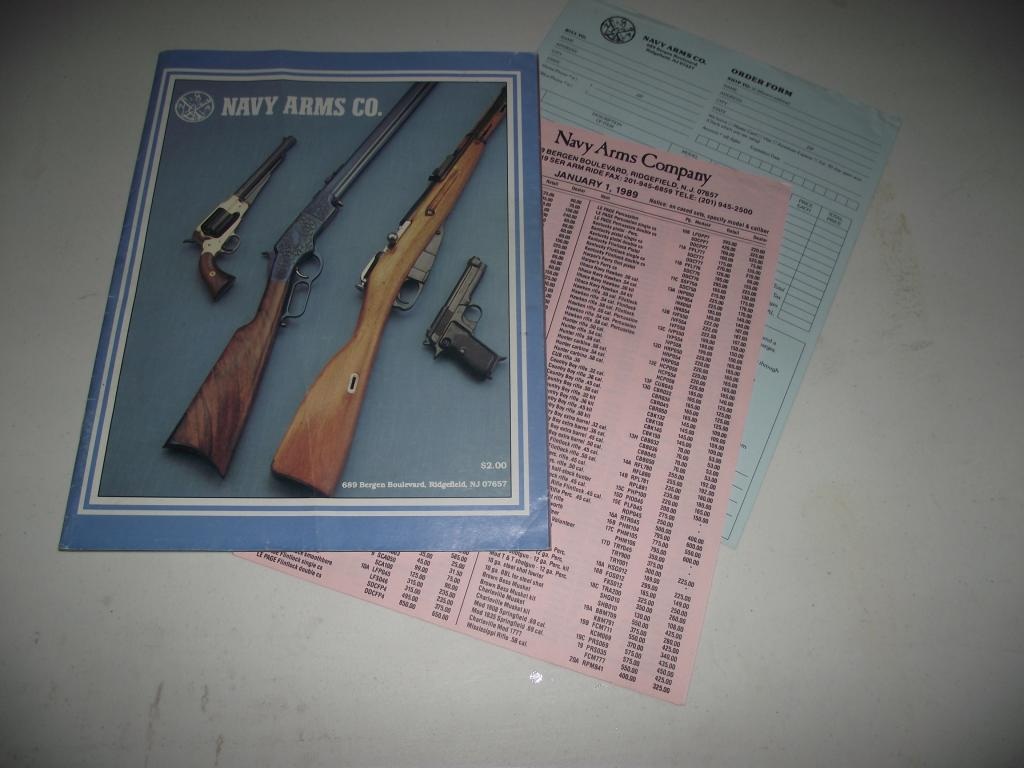 The SKS can be found on page 34 in between the Spanish Mauser and the Egyptian Rasheed. Cleaning kits, slings and oil bottles available separately. Retail price for an SKS in 1988. $150.00 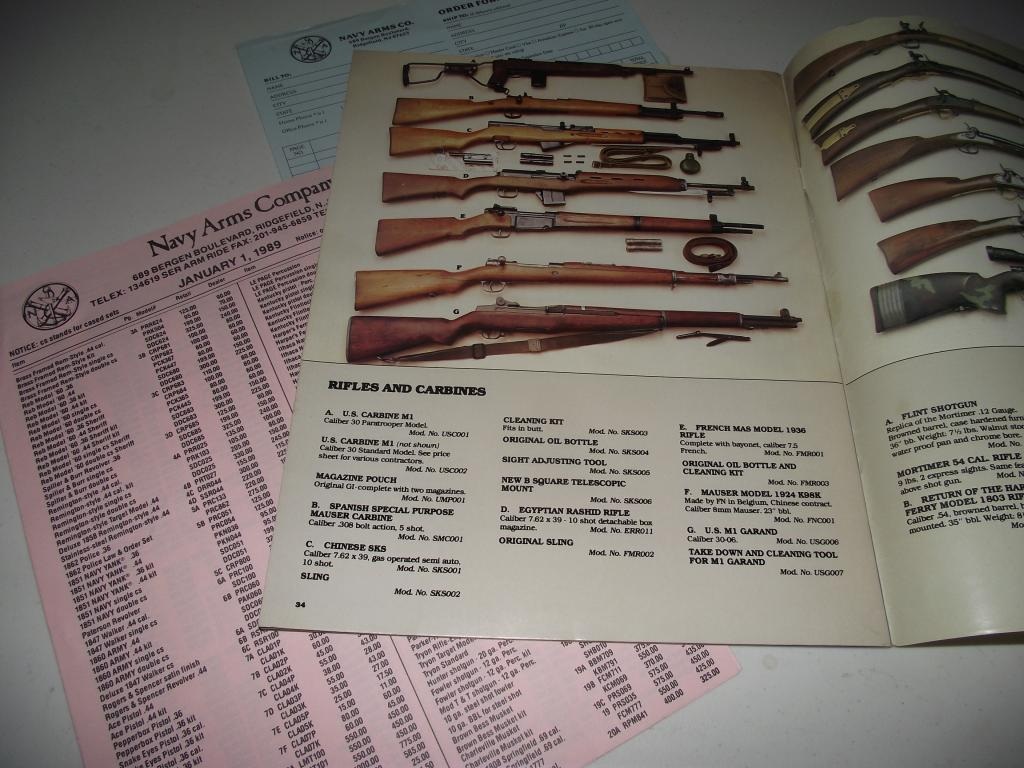 The fun begins in 1990. The modified SKS's start to appear. The Cowboys Companion is on the front cover. 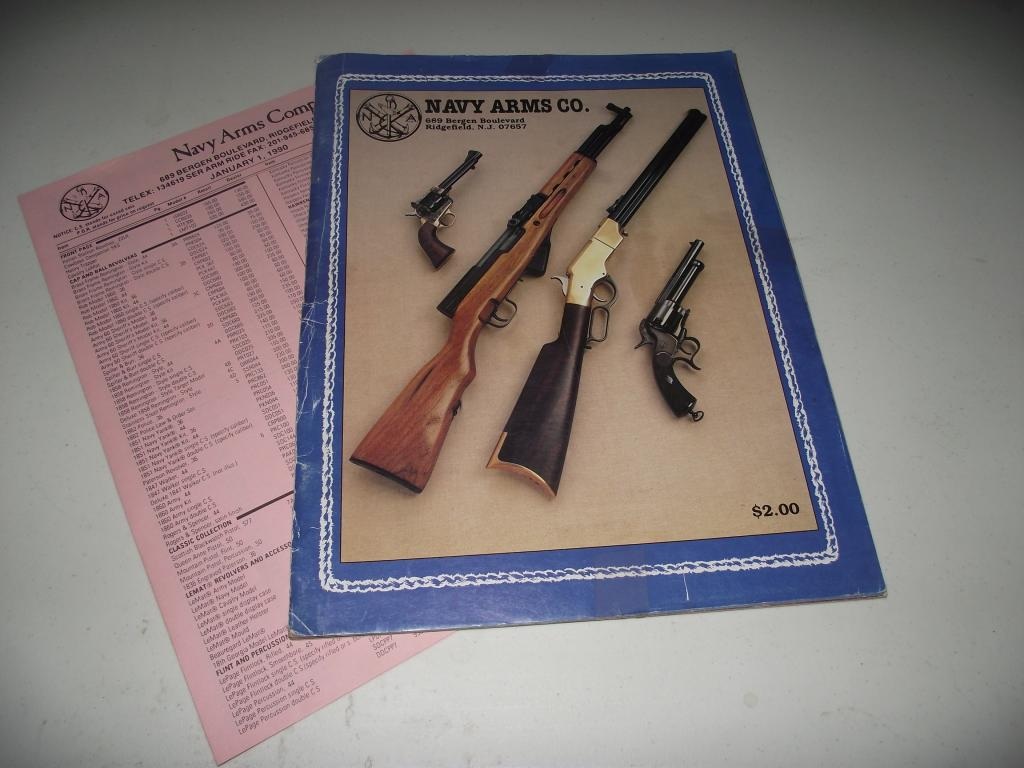 ﻿The SKS can be found on page 34 in between the M1 Paratrooper and the Chinese version of the M-44 Mosin Nagant.﻿ 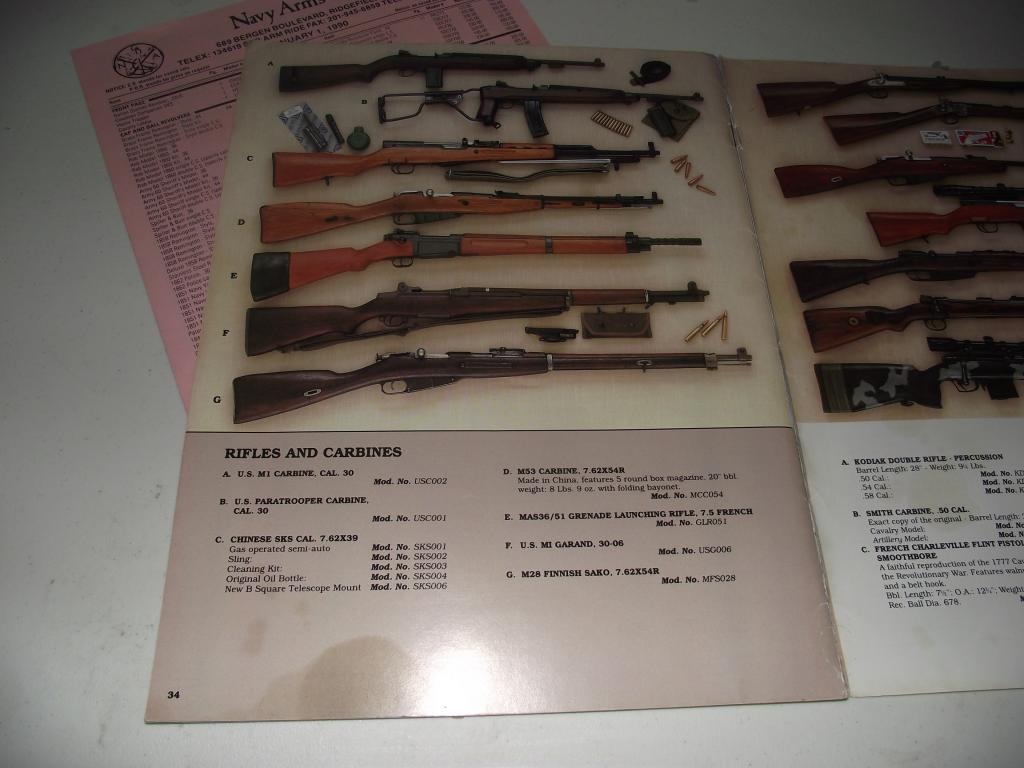 He we see the first modified SKS. The Mid Receiver Cowboys Companion with the Type 86 scope with metal/rubber eye piece and fixed mount. Yes this is the same scope (scope only) found on the Farmers Friend. 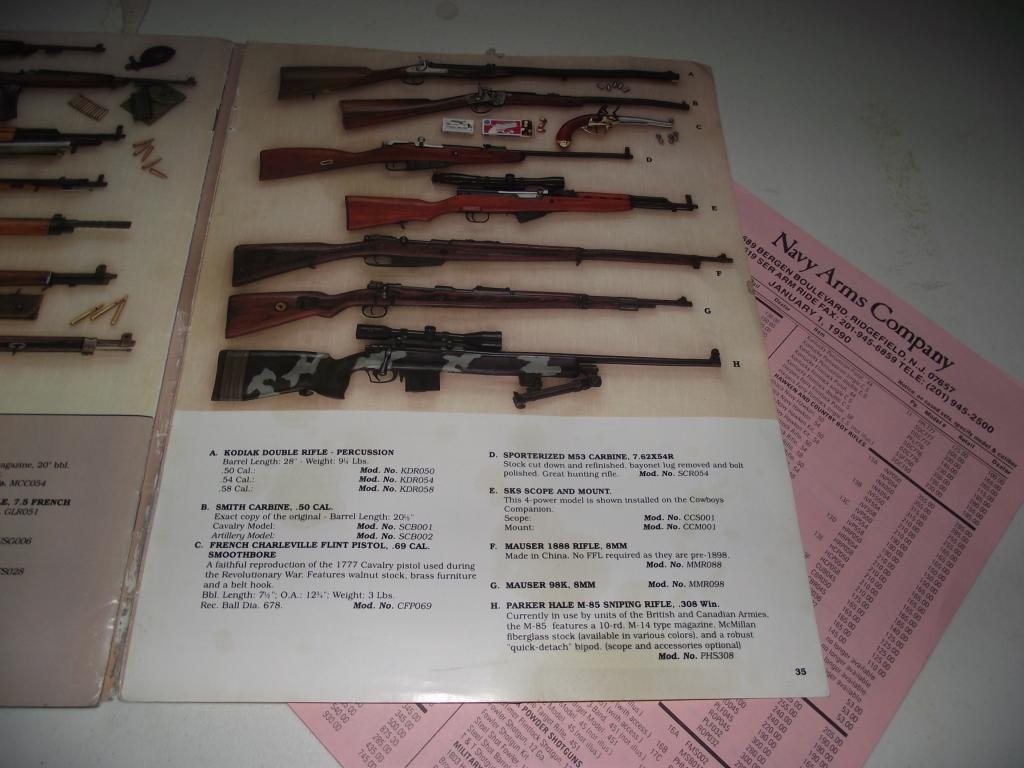 The back cover in 1990 shows the Holy Grail of SKS collecting the Farmers Friend complete with transit case. The description reads. "Exclusive from Navy Arms Co. A specially designed rifle for the farmer, hunter, rancher. incorporating the latest Chinese four power scope with a quick detachable sight mount virtually identical to the German G-43 mount. The bipod reminiscent of the RPG. Each gun comes with a wood carrying case. Complete with sling, oil bottle, combination tool and cleaning kit in the butt".  The Cowboys Companion shown without scope right below it. 1990 retail price on the FF is $325.00 and the CC is $210.00. 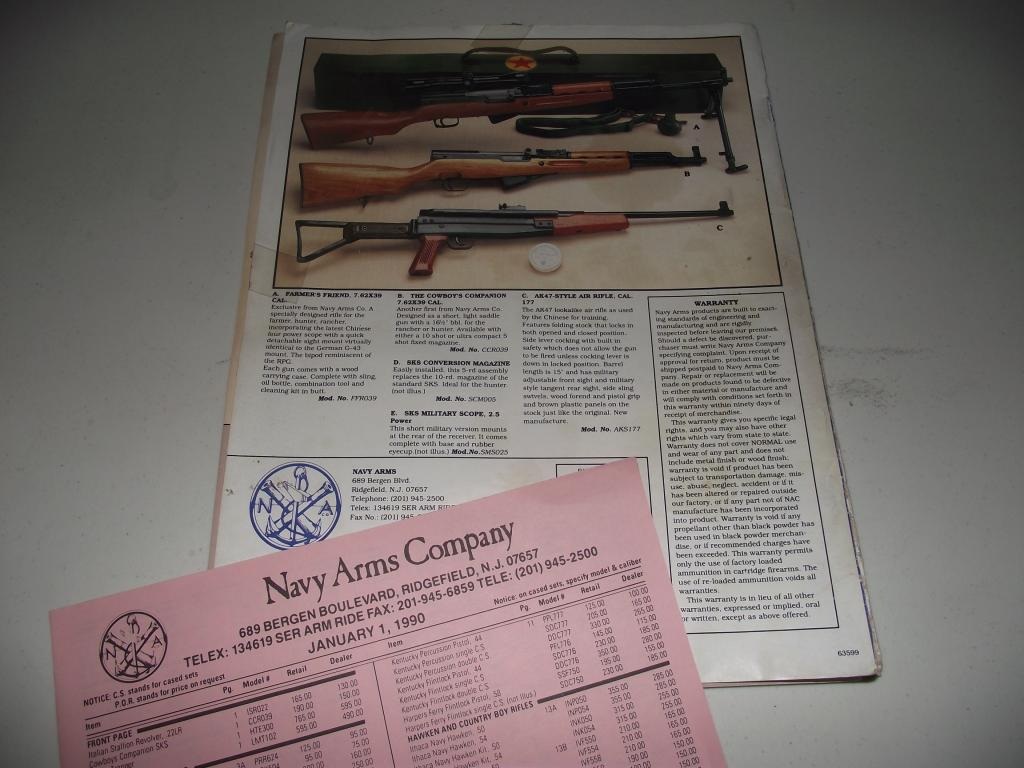 The catalog in 1991 shows the Cowboys Companion on the cover again. This time the rifle sports the Type 89 scope mount and a Polytech scope 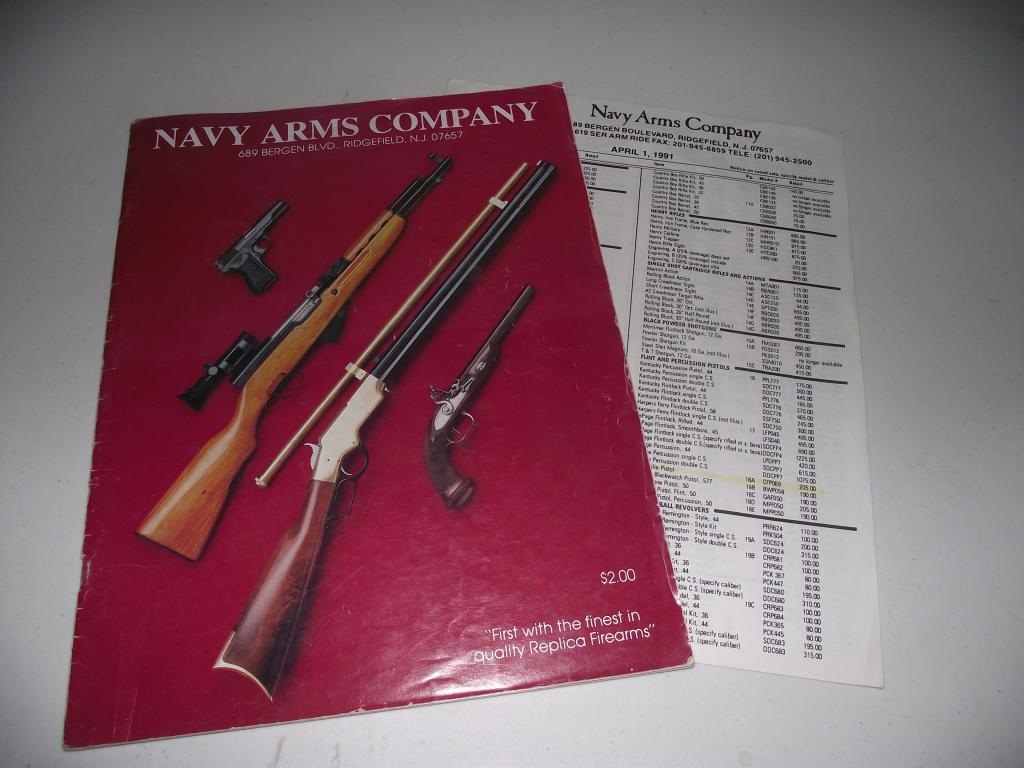 The gold mine starts on page 29. From top to bottom.
Sharpshooter  with Type 89 scope mount, Polytech scope and bipod ($330.00). Each available separately.
Standard SKS ($200.00) with Type 89 mount and BZM-1 scope ($340.00). Each available separately. Note blade bayonet.
Cowboys Companion ($220.00).
Type 56 "Para" carbine with bayonet($230.00).
Keep in mind that NA was a dealer in many accessories from  companies like Bsquare, Redstar, Polytech and Combat Exchange. Yes that is a CC in a Combat Exchange folding stock. The next time you see a CC set up like this It is possible it came from Navy Arms that way. 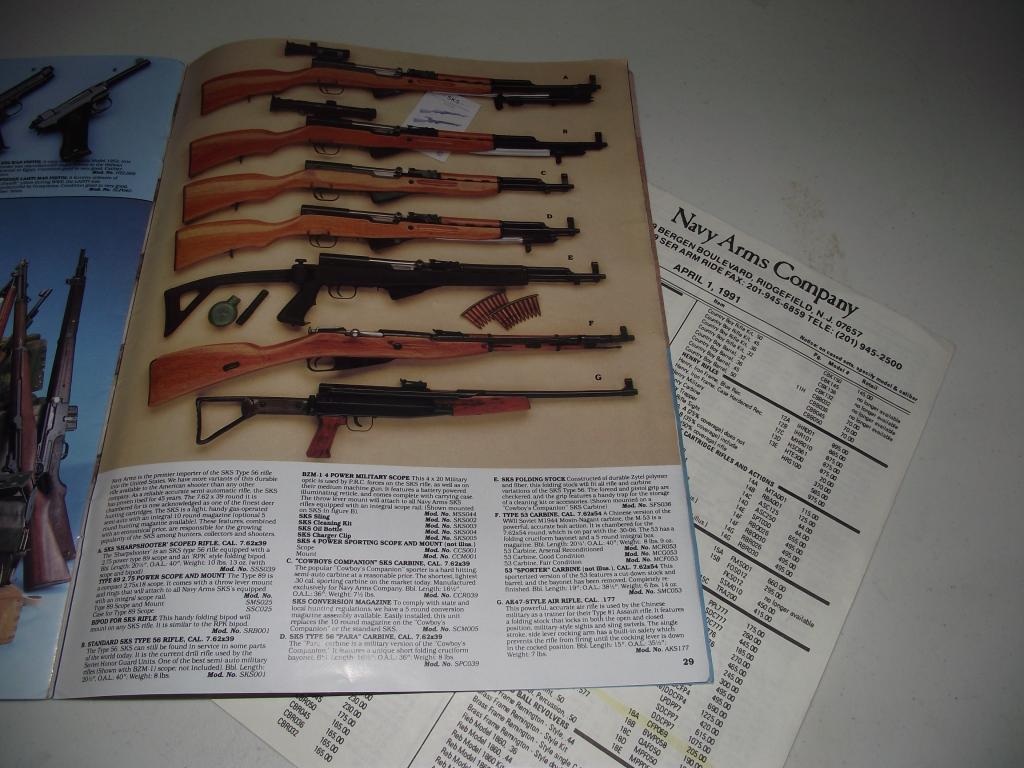 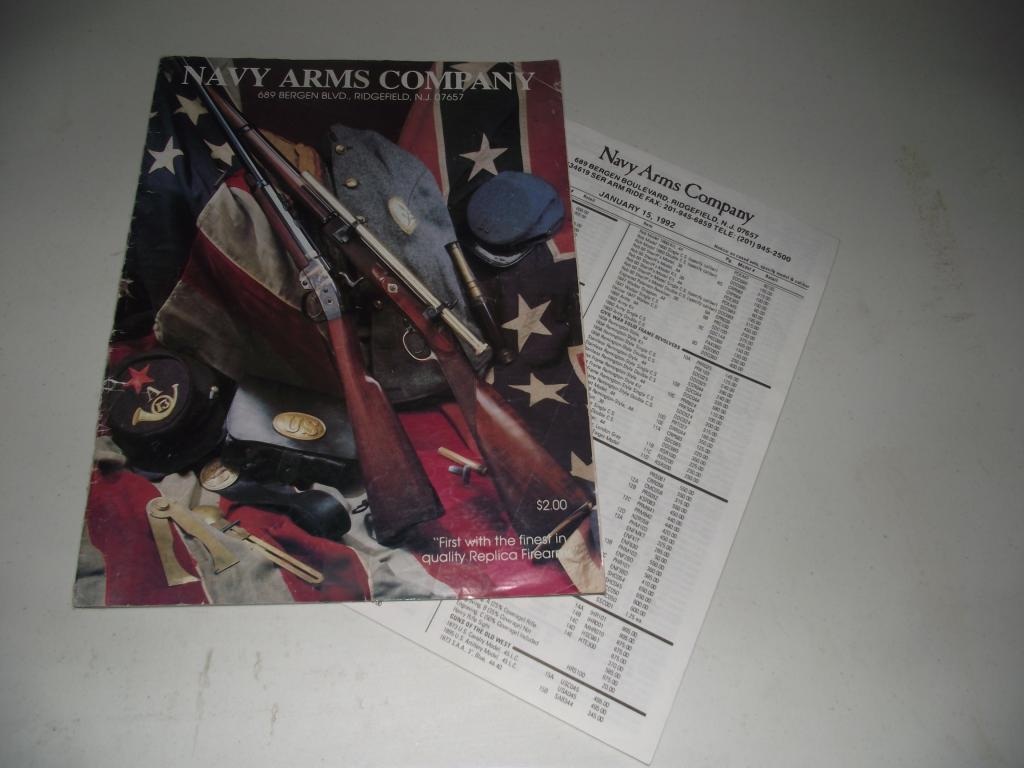 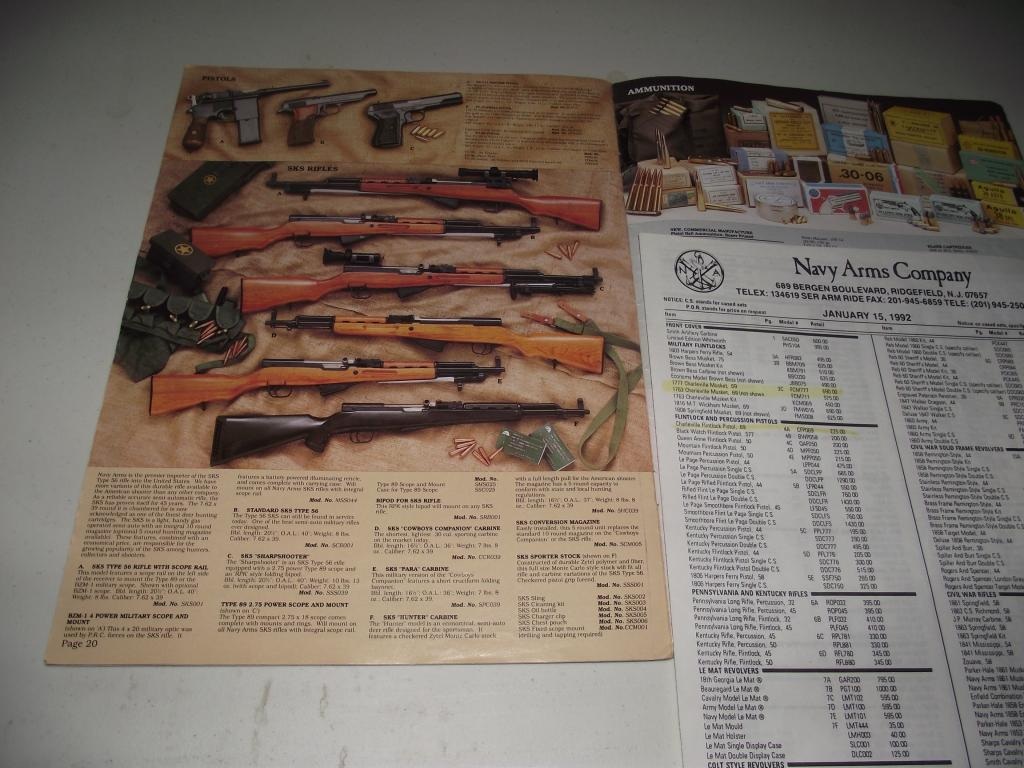 In 1993 the standard and modified SKS's continue to sell again they are on page 20. 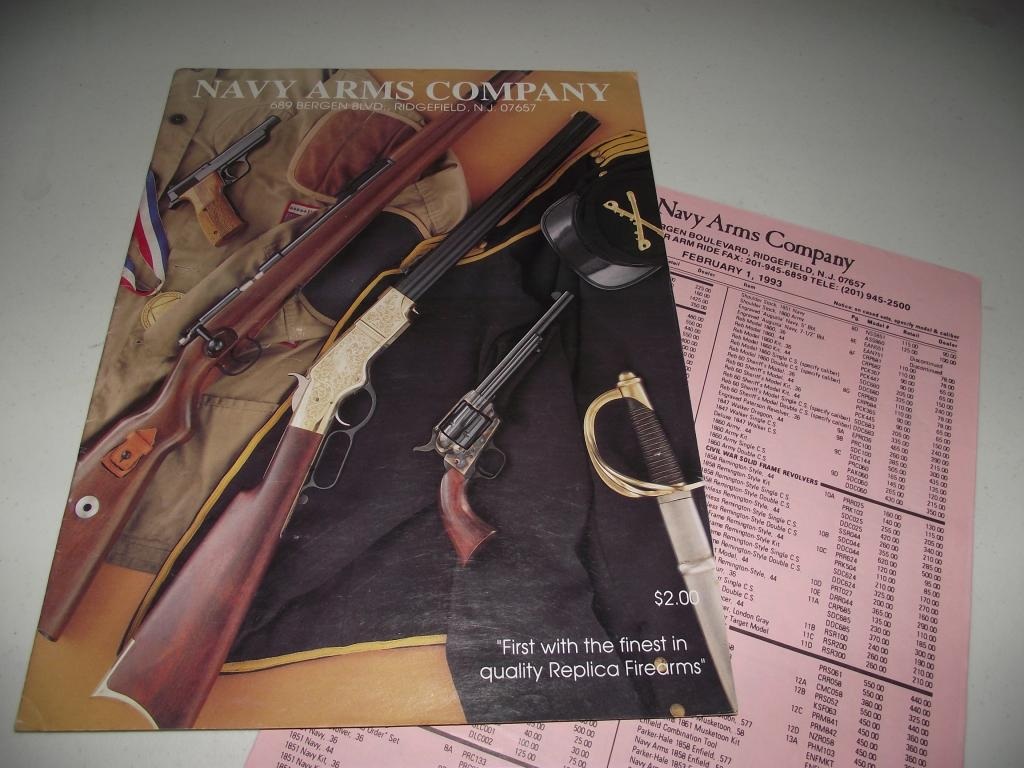 It is the same page as in 1992 with ammo added to the top.of the page. Prices remain the same . There is a storm a brewing. His name is Bill Clinton 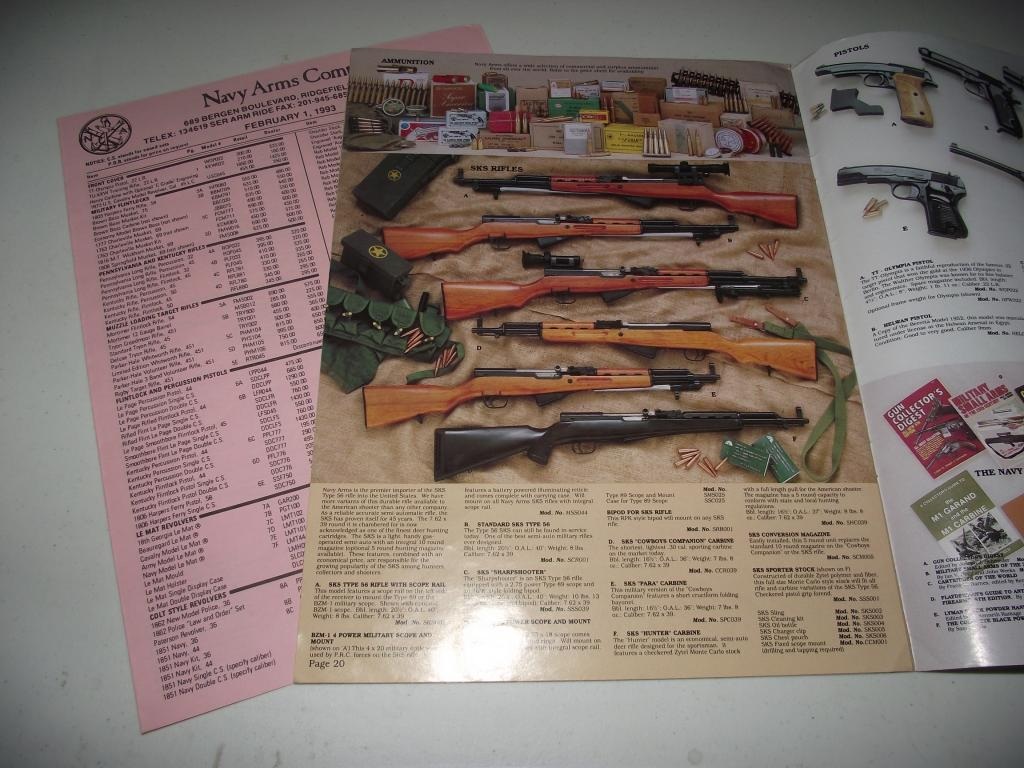 The 1994 edition has a fitting  picture  of Lieutenant Colonel George Armstrong Custer on the cover. Didn't Custer say "Whats the worst that can happen",  Well.......Enter Bill Clinton and the Assault Weapons Ban of 1994. This and other legislation killed the Chinese SKS at Navy Arms and every where else for that matter. 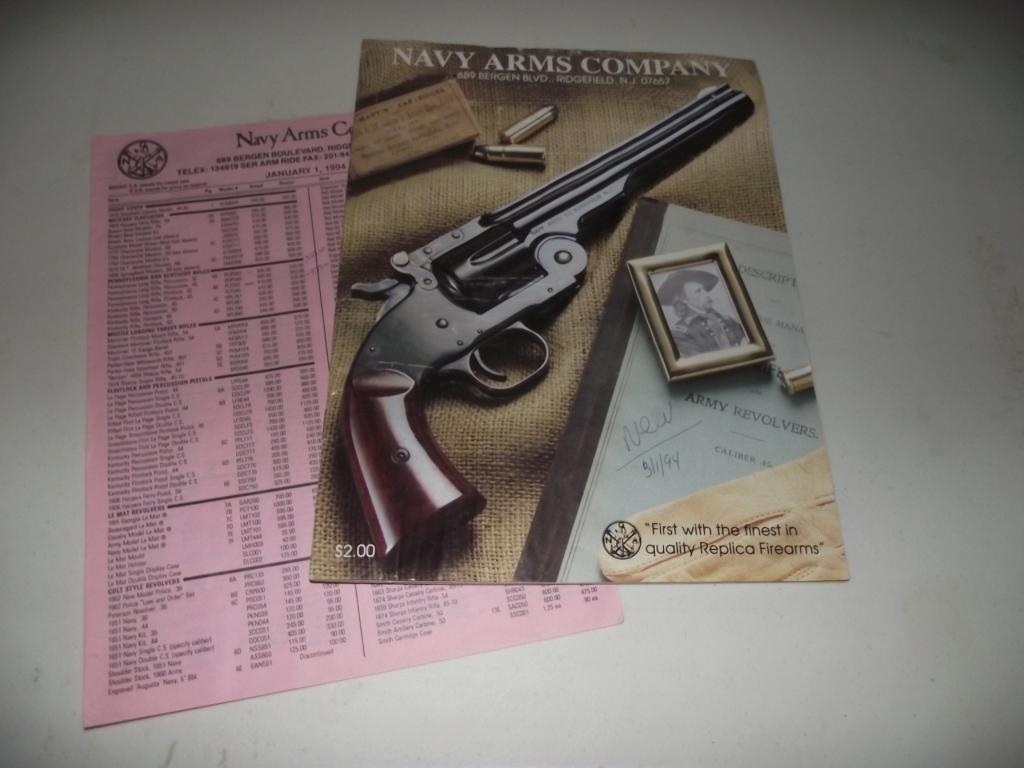 You can see the last of the SKS's in the center of the pile. This picture is again on page 20. The price sheet says it all "Check with us to see what is currently available in military surplus small arms". 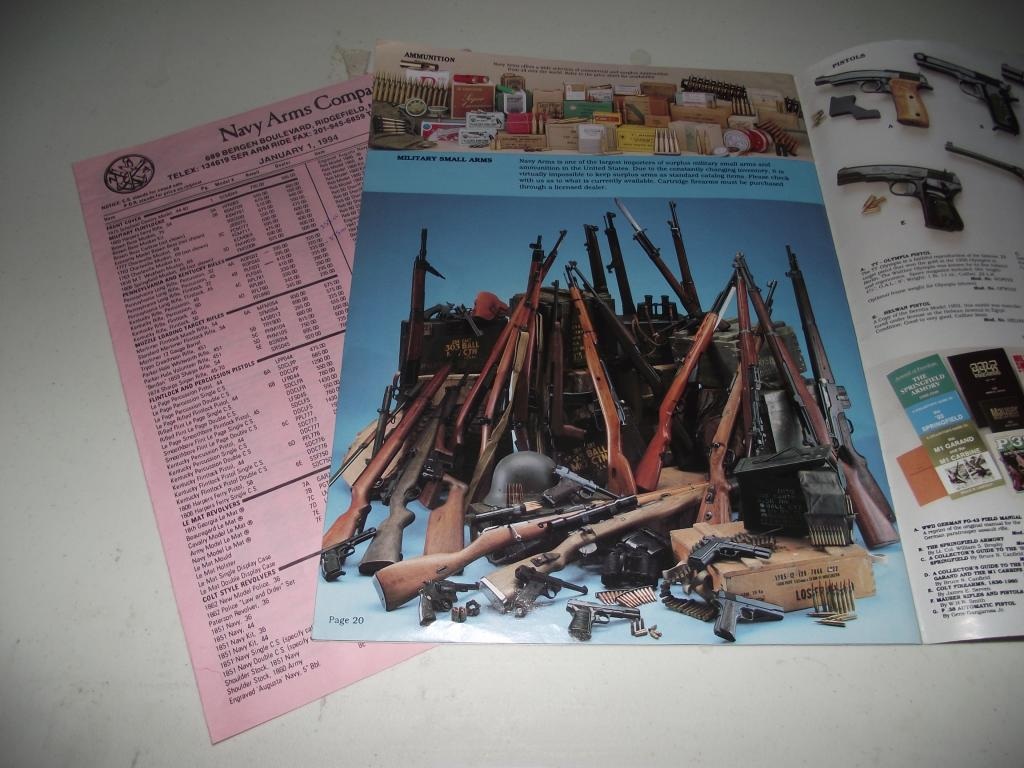 Navy Arms also used these newspaper sales circulars. These were sent in the mail and given out at gun shows. If you have any of these that cover the SKS years. Shoot me some pics in an Email. xxxsksakajoe@yahoo.com 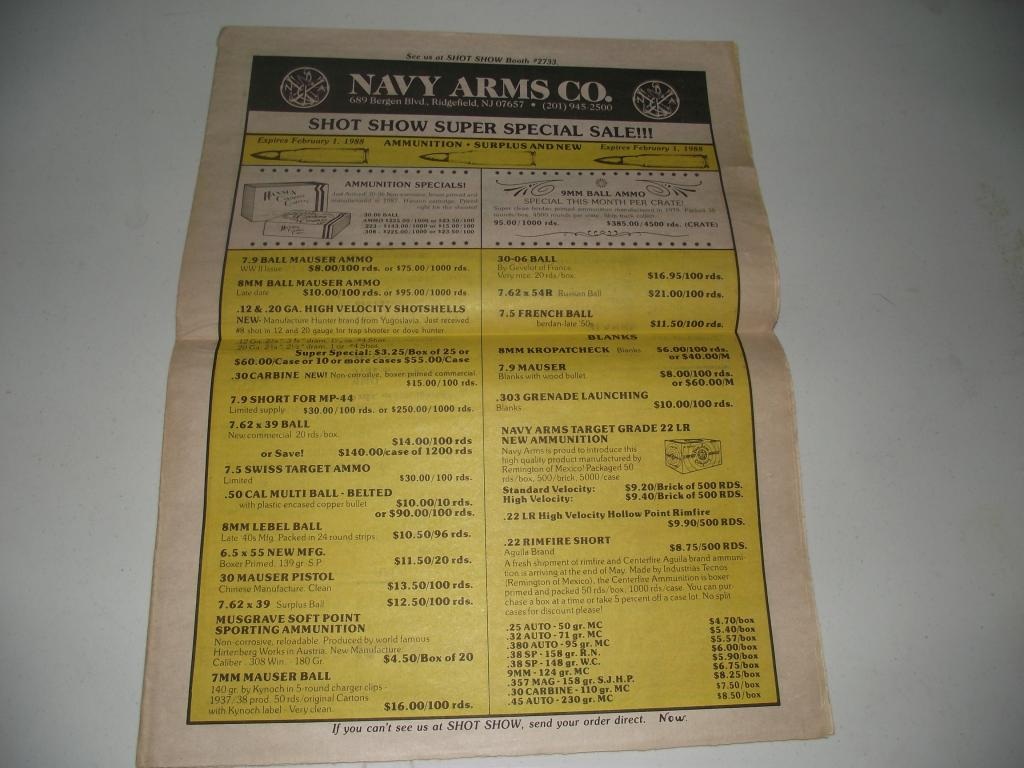 Could you imagine opening this mailer an seeing JUST ARRIVED 35,000 Mauser rifles and 50,000 Bayonets and accessories. WOW! 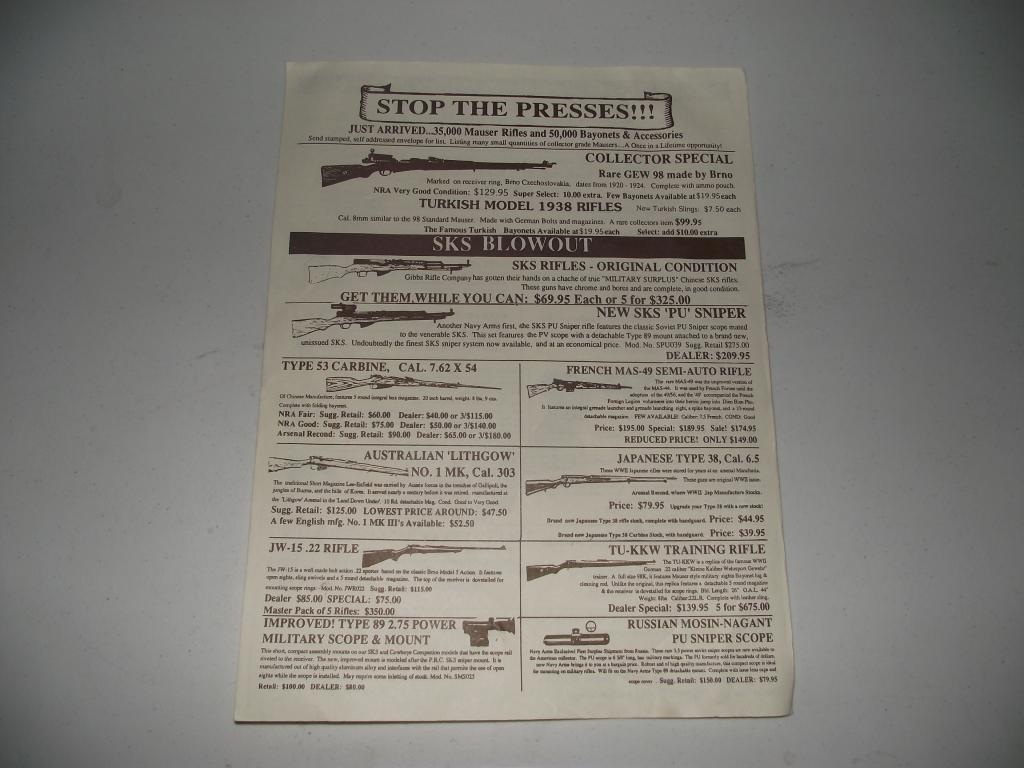 Remember this was before computers. If you sent them a self addressed and stamped envelope. This is what you got in return. The master list of Mausers. I will bet this was typed on an IBM type writer. 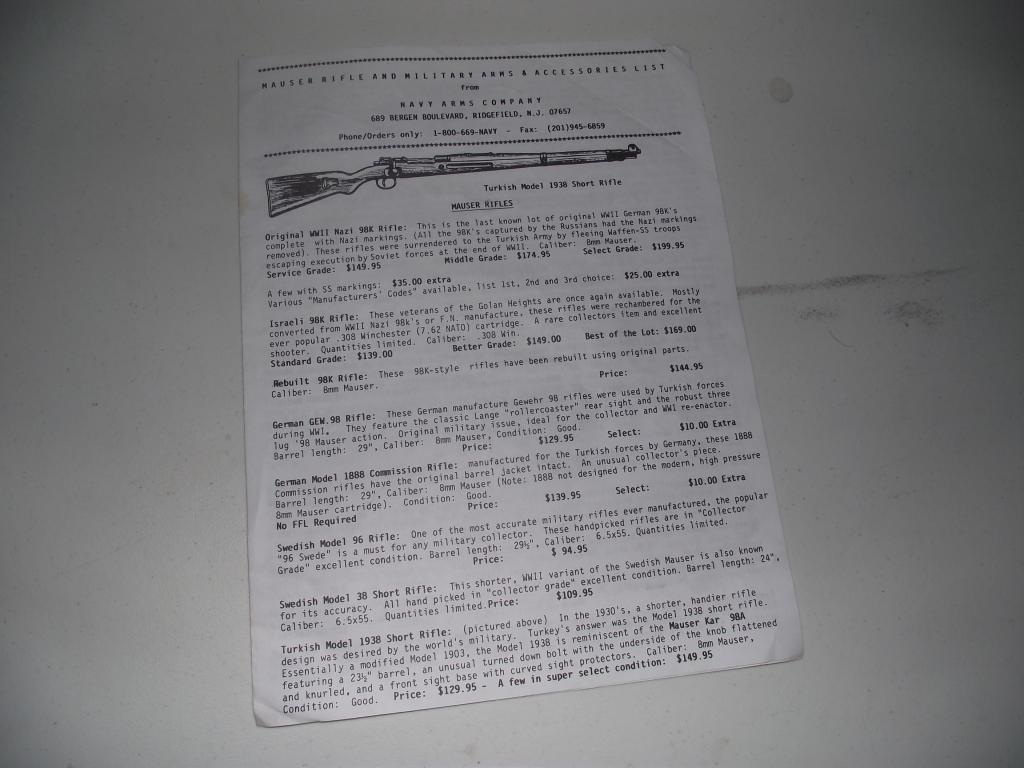 Again if you have any Navy Arms or Gibbs rifle literature covering the SKS years. Shoot me an E-mail. Thank you